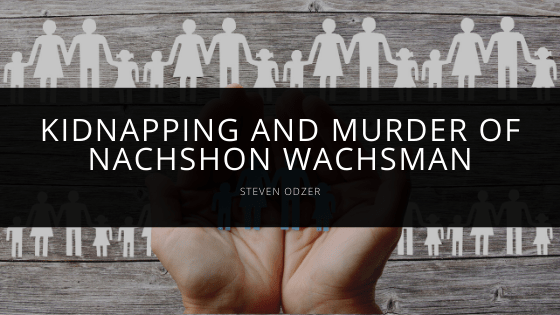 Sadden by the memory of his cousin, Nachston Wachsman, as the 25th anniversary of the kidnapping and murder just past, Steven Odzer, wants to honor his memory. For Steven Odzer, family is one of the most important things in life. “I have 7 kids and 8 grandkids,” he says. Despite having a large immediate family, Steven Odzer is also quite close to his extended family. “I have a lot of family in Israel.” On October 14, Steven and his family will gather in honor of Nachshon Mordechal Wachsman.

As a dual citizen of Israel in the United States, Nachson Wachsman grew up in Jerusalem with his seven brothers. His father was Israeli-born while his mother immigrated to Brooklyn from her native Germany. Sargeant Nachshon Wachsman served as an IDF soldier for the military.

At the age of 19, while has was on leave, the military instructed him to attend a one-day training in northern Israel. Nachshon Wachsman followed the instructions and left on Saturday night for his training. His family would expect him back on Sunday night, October 9, 1994.

After he completed the training, Nachson began his journey back to Jerusalem were his family expected him. As a common practice by many Israeli Soldiers, Nachshon Wachsman attempted to either hitchhike or catch a bus at the Bnai Atarot junction. Unfortunately, he never made it back home. According to Israeli Intelligence, Hamas militants kidnapped him as he attempted to catch a ride. Witnesses spotted Nachson entering a car with four men who wore kippahs, as to not raise suspicion. It was also reported the kidnappers had a Tanakh, siddur, and played Chassidic music.

Once Nachshon Wachsman boarded the vehicle, the four men overpowered him and drove off to the Palestinian town of Bir Nabala. Bir Nabala is only six miles northwest of Jerusalem. On October 11, 1994, two days after the kidnapping, the Hammas militants responsible for the kidnapping released a video. In the video, the militants identified the kidnapped man as Nachshon Wachsman by reading out loud his identity number and his home address.

The kidnappers also forced Nachshon so say, “The group from Hamas kidnapped me. They are demanding the release of Sheikh Ahmed Yassin and another 200 from Israeli prison. If their demands are not met, they will execute me on Friday at 8 P.M.”

Nachshon’s parents appealed to world leaders to aid with the rescue of their son including, Prime Minister Yitzhak Rabin, President Bill Clinton, and other Muslim religious leaders. The Israeli military was able to capture the driver of the car that kidnapped Nachshon Wachsman and question him about his location. When the military learned the exact location, they orchestrated a rescue mission.

Unfortunately, the rescue mission did not go as planned. The rescue operation due to faulty explosives and other technical difficulties failed. The Israeli military lost the element of surprise with the kidnappers. Wachsman was behind a solid steel door, which the explosives couldn’t open. The failed explosion resulted in a heavy open fire. When they finally made it to the chamber, they discover Nachshon Wachsman had been shot by his kidnappers.

This was a very painful loss in the lives of Steven Odzer and his entire extended family. The entire family will continue to honor the memory of Nachshon Wachsman forever.