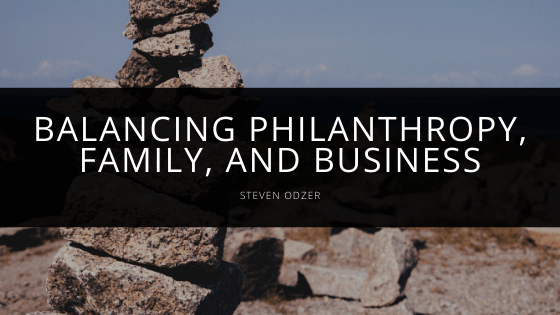 Steven Odzer had his humble beginnings in entrepreneurship when he was very young. “I started my first company at age 18 out of my parents’ basement,” He explains. It was his education that propelled him in the right direction. He learned determination and responsibility from the people he encountered, “I went to Yeshiva of Flatbush High School and then to the Brooklyn College Scholars program,” he says.”

Steven Odzer continued to work hard and challenged every obstacle. In 2000, his hard work paid off, “I was named the Ernst & Young Entrepreneur of the Year in 2000 in the area of distribution,” he says. 30 years later, instead of thinking about retirement, Steven Odzer formed a new company.

During all those years he spent building his business, Steven Odzer also raised a large family. “I have seven kids and nine grandkids,” he proudly says they keep him on his toes. When he is around his grandkids, there is never a dull moment. Aside from chasing after his grandkids at home, Steven Odzer also stays connected to his extended family. “I also have many family members living in Israel,” Stephen says. His extended family is quite important to him. In fact, everyone came together to honor his cousin, Nachshon Wachsman, on the 25th anniversary of his kidnapping and murder.

Steven Odzer’s extended family is a large motivator for his philanthropic work. Steven says, “I am a large supporter of both Jewish and non-Jewish causes.” Stephen Odzer also advocates for Arab-Jewish business cooperation. He is also a large supporter of Bris Avrohom, a large non-profit that helps Jewish immigrants from Russia integrate into life in the U.S. and continue to foster their religious traditions. Some of the non-Jewish causes he supports include the AHRC, a non-profit that benefits individuals and children suffering from intellectual disabilities.

Even with all of the work he does, Steven Odzer still has time to spend time on what he loves, sports. Steven Odzer is also a big fan of the New York Yankees. He will cheer for them when they make the playoffs in 2019. Aside from baseball, Steven Odzer also likes to follow the Las Vegas Golden Knights of the National Hockey League.