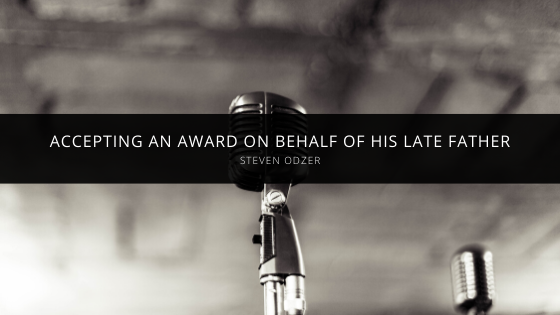 On December 15, 2019, at the Ahavas Torah Center’s celebration of 8 Years of Torah and Community Growth Gala, they presented Seymour Odzer with a lifetime achievement award for his work in the Jewish community. During the awards, the Odzer family wished Seymour Odzer could have accepted the award in person. The family always feels his presence among them, and Steven Odzer was honored to be able to accept the award on behalf of his father, Seymour Odzer.

“I am honored to be able to accept this award for my father’s work,” Steven Odzer said proudly when he addressed the audience to accept the award. “I feel that this community represents the finest that people can achieve through hard work and dedication, and I’m proud to be a supporter of this great cause.” It was a proud moment for the Odzer family when they honored Seymour with the lifetime achievement award.

Steven Odzer credits his success to his late father, Yehoshua Ben Tzvi Hakohain Seymour Odzer. Steven Odzer’s father taught him the value of hard work. Since Steven splits his time among Henderson, NV, and New York with his new business venture, Steven Odzer hopes to continue the great work of the Ahavas Torah Center in Nevada.

Steven Odzer has been successful on his own, leading his many companies such as Paper Pro Inc., GlobalSupplyNet.com, and YBT Industries of Henderson, NV. With over thirty years of experience in the distribution industry, Steven Odzer has made a name for himself in the field. Long gone are the days when Steven Odzer operated his first business out of his parent’s basement selling napkins, paper cups, and plates door to door in his neighborhood of Flatbush, Brooklyn.

Like his father, Steven Odzer also supports his community by helping Jewish and non-Jewish causes, the AHRC, and Bris Avrohom, a large non-profit that helps Jewish immigrants from Russia integrate into life in the U.S.

When he’s not helping his community or growing his business, Steven Odzer spends his time running after his eight grandchildren. He also enjoys taking his children to a New York Yankees or the Las Vegas Golden Knights game.